I am of a pacifist persuasion, but with an unhealthy interest in all things military. It’s curious combination that led to a brief and unhappy stint in the Royal Navy over 20 years ago. None the less I have maintained an interest in the workings of the defence industries and services, especially the senior service, and I have also tried to learn, deeply, the rationale of deterrence. It strikes me that the question of nuclear deterrence is freighted with emotion, unavoidably, as it is a question of existential terror. Therefore, if one is to understand and engage with the question one must dive deep into the logic and factual background, if only to avoid being swamped by subjective bowdlerising.

The question open to us today is whether to replace, like for like, the current Trident CASD (continuous at sea deterrent). Whether we should have a strategic nuclear deterrent at all is the ultimate question open to debate, and what is more there are strong arguments both ways. However the actual options which are available and sensible to select between are limited. So lets look at those, as objectively as we can, and see what’s at stake:

This is a realistic option, and if you want to keep a deterrent that counts as such, it is in fact the minimum. Included within this option are-

*The National Audit Office said this, not just me:

“[The] loss of the capability offered by the Nimrod Maritime Reconnaissance and Attack Mk4 would have an adverse effect on the protection of the strategic nuclear deterrent, the provision of which is one of the Ministry of Defence’s Standing Strategic Tasks. In addition, the maintenance of the integrity of the UK through detection of hostile air and sea craft would be compromised.” 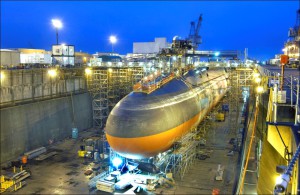 Option 2 – Retention of the capability, but not an active SSBM flotilla.

This is a new option, and one that I had felt was untenable operationally, but looking into it I think it might be possible, but certainly not cheap. Basically you have to pay for the SSBNs, and all the their associated support etc, and develop the warheads, and retain the option on the missiles. But, you then configure the submarines in service as SSNs or SSGNs – the latter have cruise missiles aboard in the tubes where the Tridents would have gone. This is what the USN did with a few of their SSBNs about 10 years ago. As SSNs these would be very expensive (ok SSNs are colossally pricey anyway, about £1.5billion each).

Bear in mind too that you’d have to actively degrade their performance so that when you needed to switch them up as SSBNs in future, their previously recorded signatures wouldn’t be usable to a potential enemy. And you’d never, ever operate a single submarine as an SSBN and a SSGN at the same time, as it puts the SSBN role in danger. And to those who suggest there is a tactical, non-nuclear role for Trident, forget it. That system must be used exclusively for it’s strategic job for that strategic job to be viable.

They’d also be big and unwieldy, which is a disadvantage in a lot of the sneaky ops that subs need to fulfill. On the upside they could carry a lot of cruise missiles, and support large special forces teams and a lot of intelligence gathering kit. Overall, it’s a compromise, and an expensive one. The shopping list for this is:

This is the only one with cost savings, and I think it is, basically irreversible. If we don’t develop replacement warheads for Trident, we will lose the ability to do so in about 5 years. Aldermaston will shut down, the technical skills will degrade, and the capability will become economically prohibitive to spin up in future. The balance of submarine forces we have should then be revisited – with no SSBN flotilla to support tasking of the current SSNs will be more flexible, and we could once again consider SSKs. Diesel electric subs were unaffordable options alongside the deterrence role (well equiped ones are about 3/4 of the price of an SSN), but for many tasks the navy is given they are preferable. In the shallow clear waters of the Mediterranean and the Middle East they have real advantages. They’re not cheap though, and SSNs still have a role and a place in the fleet that is unchallenged. Also, we stopped using them 20 years ago, and no longer have current experience of building or running them. Much to expensively relearn there!

The shopping list for the last option is totally open to argument, but here’s the key things I’d expect to see on it:

The savings? Well the following things are not needed, and can be re tasked:

And the following you can shitcan- this is the savings, and the job losses:

So, what do I think is the best option? Well, I happen to believe that the deterrent serves no purpose. I do not believe it deters aggression from any rational power, since these powers (think Russia, China) have their ambitions checked in a more complex multi player balancing act, and our nukes in the mix makes no odds either way. I do not either believe that it deters any irrational power – if ISIS or extremists in the middle or far east gain weapons, their calculous for using them will not be affected by the UKs possession of nuclear weapons. And what is more I cannot foresee a situation where it will make any difference. Therefore their possession, or the capability of their possession, is ultimately pointless. The third option, really, just saves some, small amount of money, and allows us to consider what a sensible military set of capabilities might be, shorn of the need to maintain a useless function.

I do not share your consensus, and that’s fine