Dare I wade into a post about politics? Actually, the fact that question is even a question is rather the point of this post. I’m going to argue here that for the last decade, no, probably two decades, we have forgotten that politics, actual different points of view on how things ought to be run, is something worth discussing, arguing, and challenging one anothers’ opinions over. My contention is that we have slid, as a culture, into an apolitical consensus. And that this consensus was designed by those who had a vested interest in us no longer thinking, feeling, that politics was something that interested us any more. In a nutshell, political disengagement was a designed result of the last 20 years of Conservative, New Labour, and Orange Book Liberal politics, and it’s an uncomfortable but exceptionally health shock to the system to discover that we do hold different opinions, and they are worth discussing.

However, it’s very hard indeed for us to have these discussions, for two main reasons. Firstly that last 20 years of political anaesthetic, and secondly the modern social media discussion forums (where I’m assuming this screed is going to be poked with sticks and generally scowled at). What’s the problem with social media you ask? Surely it’s letting us all express ourselves? Share key political ideas?

No. It’s not. Look at your feed. If it’s anything like mine you’ll find a good 90% of the posts in it are so close to your own political opinions as to simply be the howl-round of a badly balanced PA system. You’re hearing your own ideas fed back to you. The impression it gives is that:

Your social media feed looks the way it does because a media channel filled with things you agree with is a much better place to sell you things. it’s more or less the same reason that TV and the print press have colluded with the false consensus model for 20 years. Stick to the middle ground, let the Overton window be nudged where it may, and what seems reasonable will be watchable, feasible, and a fair place to buy and sell advertising.

We’ve basically lost the desire or the ability to discuss political issues. We don’t want to (it’s boring, I’ll feel stupid, I’ll be shouted down, it doesn’t make any difference) and we wouldn’t know how if we did (just TRY and avoid this turning into mud slinging – even the pro’s can’t manage it (though that is actually part of their trick)).

And then Jeremy hit.

I’m going to step back for a moment and try and explain why I think Jeremy Corbyn got elected, because I think it tells us a bit about the whole political landscape. After Labour lost the election, they were stunned. The centrists (actually the right wing of the party – they can’t let themselves think of themselves like that, but looking at it from a purely geometrical point of view, that’s what they were) had done everything they could to ingratiate themselves with the voters who’d abandoned them for the Liberals 5 years before. However, they made a colossal error. No one voted Liberal instead of Labour in 2010 as a step to the right. Everyone who voted for Nick Clegg felt ‘ho hum Gordon might not be a terrible person, but he’s basically too much in the pocket of the City of London, and there’s still Iraq hanging over the whole thing’. We wanted to step to the left. Not massively, but enough to reel back the tory lite that was happening. Nick Clegg missed that. So did the Labour Party. In the Westminster stitch up that was the 10 days of building the coalition, all reference to the will of the people (as in what did people actually want) was lost in a swirling fantasy land.

Five years later, the Liberals had no one who believed in a shred of anything they ever said, and the labour party were chasing the reflection f a ghost the wrong way down a corridor. The Tories didn’t win the election, they just picked up enough votes from those who were scared enough or stupid enough to think they were better off under them. Plus the bankers, natch.

And then Jeremy says ‘sure, I’m up for it’. And a good chunk of the adult population says ‘oh thank fuck, a not-tory for once’.

We do not want consensus now. Consensus crashed the city, and made us shutter child mental health services to bail the bankers out. Consensus has put people I know in the hands of food banks. Consensus is flogging off our hospitals to line the pockets of the Tory front bench. Fuck consensus.

I want argument. I want good rigorous debate. I’m not interested in ad-hominem trolling (which is a shame because that’s what the internet defaults to). I want people to honestly argue the value of ‘gripping the deficit’ if it means that more people are homeless, the last shreds of the steel industry are crated up and the only power generation getting any subsidy is Chinese state owned nukes, and not community owned solar power.

My local MP is a crushing disappointment. We had Stephen Lloyd until a few months back. A profoundly principled Lib Dem (yeah, there’s irony for you). In spite of putting more energy into the town than is possible to imagine a human being delivering, the Tory PR machine rolled in, and bank rolled Caroline Ansell. [Edit here, a good friend pointed out I had kinda strayed into Ad Hominem, mea culpa] To say she’s vapid is to give a bad name to vapour. I’d love to argue her politics with her and her supporters, but her public profile, so far as I can tell, is designed to keep up the consensus game. She exists purely in a bubble of PR. Our hospital is fucked (seriously heavily screwed) – she just rocks up for photo ops. Our transport infrastructure is screwed – she beams from every opportunity to shake hands with developers.

It’s sort of savvy – PR only, never be associated with bad news, never have a photo op you can’t smile through. But sadly for her (great for us) that is the strategy of CONSENSUS. that’s about being on the right side of the smile. It reminds me of when the war criminal Alistair Campbell used to brief journalists about to interview Bliar – “we don’t do god” (the issue then being that Blair was seriously under the influence of bizarre woo). Nowadays any mainstream politician “doesn’t do politics” – at least not in any meaningful way.

You’re sick of consensus too you know. Maybe you don’t know it, but you are. Here’s a challenge – find out which political parties are to the left or right of you. Actually there are two dimensions to this test – as well as left and right (which are largely around how you run an economy) there’s also libertarian vs authoritarian. Take this test, the political compass and I pretty much guarantee that you will not be a modern UK Tory, nor indeed any of the mainstream New Labour, Liberal, or Conservative political movements of the last 20 years. It’s almost as if the westminster bubble, so enamoured of it’s cosy relationship with the press and it’s thorough emasculation of any other power structure in the country after Thatcher, has drifted of and up and to the right unfettered by any dialogue with the country. 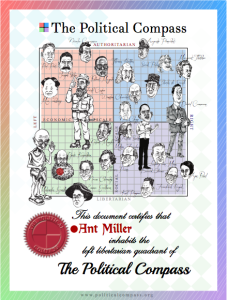 So, consensus, no thanks. Enough of ‘yeah that sounds reasonable’. Now I want ‘why?!’. Now I want ‘Explain yourself!’. Now I want an active probing 4th estate (not that the snoopers charter will allow that), now I want freedom to strike, to protest. Now I want vibrant political discourse. Now revolution. A revolution in conversation.