The final day of WCEU 2015 this year was Contributor Day. Weirdly it felt a little like an after thought – I’m sure it’s not intentional, but the atmosphere was lower key, the after party had been the night before, and the whole set up was less formal. I guess a few people had already headed home. However, the weird thing is, contributor day is sort of the ‘meat’ of a WordCamp – it’s where actual nuts and bolts decisions get made about WordPress, when critical issues get properly looked at, and when the vast diaspora of virtual teams who actually build WordPress, for free, across the world, actually get to meet each other face to face.

It’s a really strange phenomena – I’m over stating it, but it’s as if no decisions can be made in the WordPress project unless by deeply hungover people surrounded by 3 days of party wreckage. maybe that’s how all such decisions ought to be – all EU summits should be held in the green room the day after eurovision before the cleaners have a chance to come in.

Anyway, in the midst of all this critical alkaseltzer dropping, we held a handful of really rough and ready impromptu interviews with whomever we could find and who couldn’t run off fast enough. Brilliant chats really, getting into the experience of first timers like Sophia and long timers like Zé. There’s even some discussion of shirts. Yup, that’s how awesome this days discussions were. 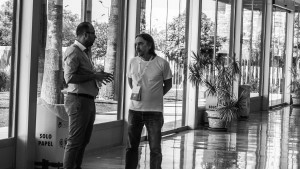